A FOIL Request to Cattaraugus County


A previous post (October 16, 2015) cited a comment from the Salamanca Topix site (dated May 2013) linking my brother’s death to others that happened around the same time under suspicious circumstances yet were apparently ruled suicides.  One of the individuals named in that Topix comment was Tim Nye.  As also mentioned in that same October blog post, I did not have any official information about the death of Tim Nye or the other individuals, including a young pharmacist named Dale Tarapacki, whose body was found in his burned-out truck, and therefore I could not make any assumptions about the investigations into their deaths.  But for several years various individuals in the Salamanca area, in referring to my brother’s truck fire, have brought up the deaths of Tim Nye and a Rite Aid pharmacist (Dale Tarapacki) as similarly suspicious incidents.  This post reports on my efforts to get information about Tim Nye’s death through a FOIL request for the official records.

Since I had obtained the investigation report and related documents, with redactions, on my brother’s death through a FOIL request to the New York State Police, I submitted a FOIL request to Cattaraugus County for the records on Mr. Nye.  To my complete surprise, my request was denied, with the explanation that “[r]ecords are compiled for law enforcement purposes and are inter-agency or intra-agency materials, not statistical or factual tabulations or data.”  The Cattaraugus County response merely restated the language of section 87 (2) (g) of the New York Public Officers Law.  But, logically, how could such official documents related to the death of Mr. Nye not contain factual data?  I appealed that decision, citing that the purpose of the Freedom of Information Law is “to promote open government and accountability” and that if a police report or any related document has any factual data, then that information has to be disclosed.

Soon afterward, I received a response from Records Appeals Officer John Searles, with two pages related to my request and with a reiteration that records “are compiled for inter-agency or intra-agency purposes.”  The two scant pages, however, contain very little information.  [They are posted below, along with my original FOIL request, my letter of  appeal, and Mr. Searles' letter of reply.]  Neither Mr. Nye’s name nor his address appears on either of these documents.  An internet search listed his address as 4445 Hungry Hollow Road in Great Valley.  If that is the case, then Tim Nye lived in the same neighborhood as my brother.  The date of the incident, as recorded in the documents sent to me by Mr. Searles, is September 2, 2004, which was less than a year after my brother’s death.  The first officer on the scene is listed as Andrew Rozler (a deputy sheriff, who, I was informed, lived on Cross Rd., close to my brother’s house).

The few factual statements provided are not very informative.  The “Incident Maintenance” sheet lists the location (i.e., of the discovery of the wounded Mr. Nye) as “Hungry Hollow Great Valley,” yet the other sheet, with a very brief narrative, states that “[p]atrol found above vehicle parked with the door open on McCarthy Hill Road in the Town of Great Valley.”  It is thus unclear where Tim Nye was actually found.  Was it near an intersection of Hungry Hollow and McCarthy Hill roads?  The following is the only information given about Mr. Nye himself: “After checking the scene, patrol found the victim laying [sic] on the ground with a shotgun laying [sic] next to his feet.  Victim had suffered an apparent gunshot wound.”  No mention is made concerning the location of the wound.  Although the penultimate sentence of this brief narrative states that the officer “requested an ambulance,” nothing further is indicated about Mr. Nye’s condition.  The sixth and final sentence is redacted.

I replied to Mr. Searles on January 20, 2016, that this was an unsatisfactory response to my FOIL appeal and that Cattaraugus County was required by the FOIA law to release all documents with factual information pertaining to the death of Timothy Nye.  He responded on January 27 with the same rationale as before, justifying the denial on the basis that the records “are intra-agency materials of the Sheriff’s Office” and adding the following: “Specifically, these records consist of nine pages of intra-agency investigation reports of the Cattaraugus County Sheriff’s Office.”  I sent a final letter to Mr. Searles on February 10 stating that I considered his position “completely unwarranted and in violation of the New York State FOIA law.”

Why should Cattaraugus County refuse to provide access to records that should, at least in part, be available to public scrutiny?  Are they trying to hide facts about suspicious deaths from the public?  How can they get away with such violations of the law?  As some individuals have suggested, officials know that people of modest incomes cannot afford to go through an expensive lawsuit to obtain records that should be available under FOIL.  But that does not speak well of our justice system. 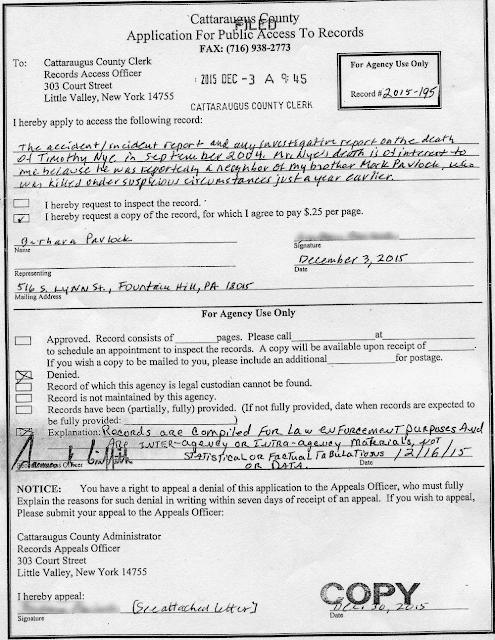 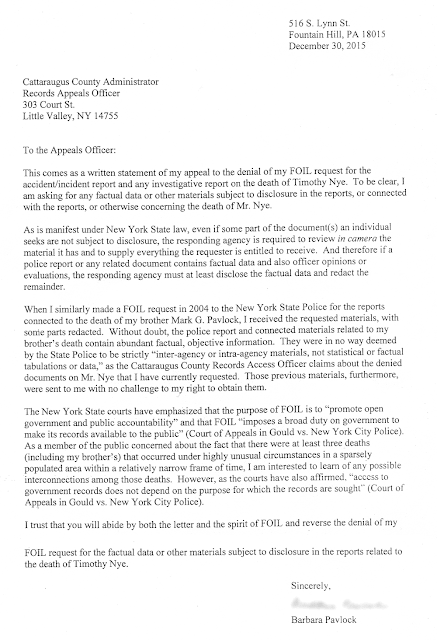 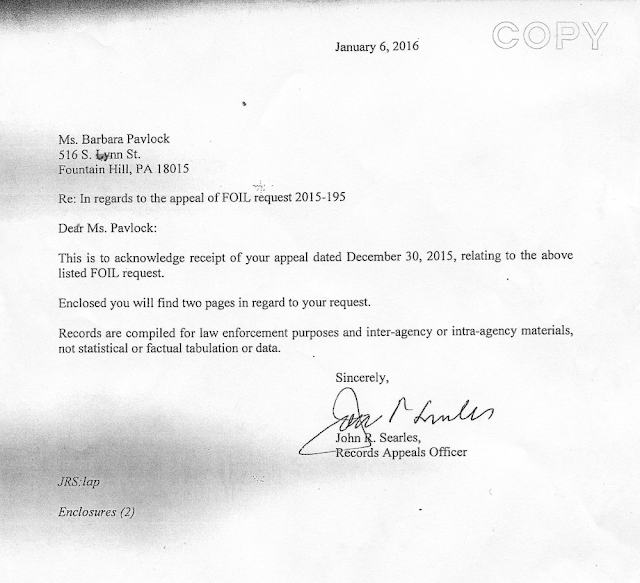 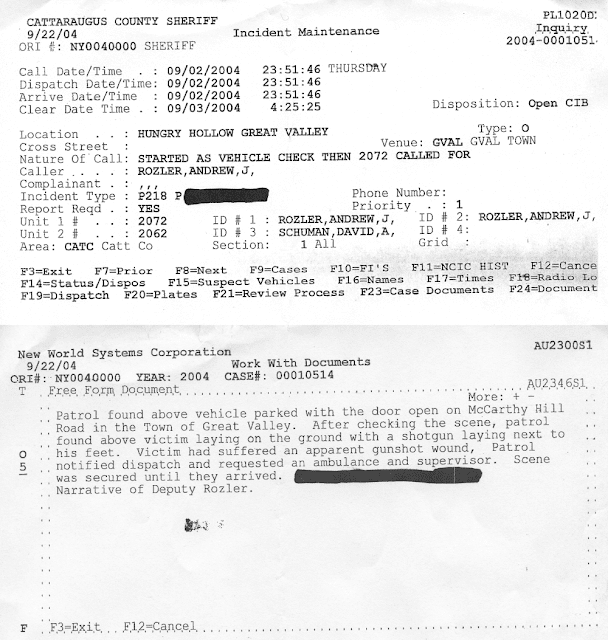 Barbara Pavlock
I am a professional and have written a number of journal articles and two significant books on literature.

Get this Recent Comments Widget